The rule of thirds and golden sections in photography

Why the subject should never be in the center of the frame? Let's learn the rule of thirds and golden sections in photographic composition.

There are a lot of considerations that a photographer should make while he thinks how to frame a photograph. Most of the conclusions are up to the photographer personal preferences, but there is a thing that should always be, at least, considered: it's called the rule of the thirds. The basic concept of the rule of thirds is really simple: if you want to shoot a photo that is correctly balanced, the subject should almost never be placed at the center of the image, nor too close to the edges.

Maybe, using your camera, you've already seen a grid similar to the one in the right image above. Reading this tutorial you will figure out what is the purpose of that lines: for a correct photographic composition, in fact, you should always try to place the subject, or the point of greatest interest, on one of the grid intersections (on the points marked by the numbers 1 to 4), this is the meaning of respect the rule of thirds.
This "golden rule", in fact, determines the position of the subject on one of the four lines that make up the grid above. It doesn't matter whether you are photographing a landscape, a dog or your family: the rule applies almost every time!

Why is rules of thirds so important?

Let's start from a simple premise: often placing the subject in the center of a photograph makes the photo static and boring. Each image has four points of interest: the numbers 1, 2, 3 and 4 in the image above, the same as we were talking about just above, which should be used to position one or more interesting points of the photograph, so that you can correctly frame the scene.
There is a reason why this rule works so well: the human brain, processing an image, always looks for something to start from: usually the observer starts by focusing on point 1, then moves on to the point 2, then point 3 and finally point 4. The Rule of thirds is valid in this way throughout the Western world, where the reading is from left to right. Paradoxically, an Arab who has no contact with the Western world, used to read from right to left, will look at the points of interest of the photograph from right to left (in the order 2, 1, 4, 3).

According to the rule of thirds, in panoramic photography, the horizon line should pass through points 1 and 2, or through points 3 and 4. In the case the most interesting part of the photo is the sky, the horizon must follow the lower line, so you leave greater importance to the clouds. In case the sky is not very interesting, it should be positioned to fill only the upper third, to focus more attention on the land.
Place the horizon outside the lines of force would create a virtually unbalanced image... In both cases you can see that two-thirds of the photo should be dedicated to the subject to whom we want to give more importance, from this comes the name rule of thirds.

In the left photo the sky dominates the mountain, attracting attention to itself. On the right the sky has been considered as a secondary element, to ensure that attention goes on the forest below. In both cases the rule of thirds is effective.
If the subject of photography is vertical, the same rule applies, but applied to "short" lines.

Rules of thirds on the portrait

If we need to take a ritrait of a person, we also should try to respect rules of thirds, but on one of the vertical lines of strength, with the body slightly oriented towards the "wider" part of the image, such as in the example photos down here. In profile photographs, this rule is even more important. To create dynamism, in fact, it is necessary to leave free the part of the image in which our brain assumes that the subject is involved, so it should be left free the direction in which the subject's gaze points.

Exceptions to the rules of thirds

In the case of symmetrical photographs, the rule of thirds could be partially ignored, in favor of a perfect symmetry. The photos below would lose its charm if the subjects were out of the center. It should be noted that, in this case, the square clipping format is preferred, to try to "trick the brain" to look towards the center of the image, so even if there is an "infringement" of the third party rule, it is motivated by the attempt to shift attention from the "four points of interest" to a single point, in the center of the frame. 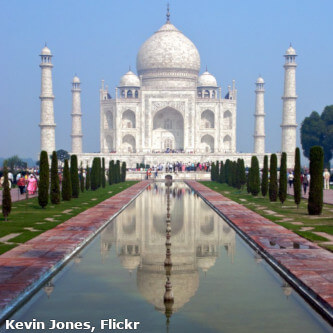 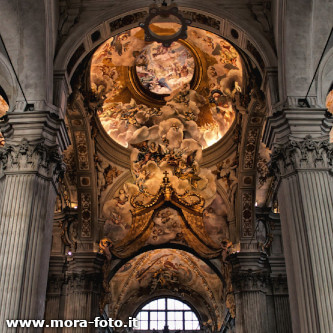 In addition to the rule of thirds there is a second technique used to compose photographs, the famous Golden Spiral (or the golden rectangle) and the consequent Golden Sections. This proportion is said to be particularly pleasant, as it is often present in nature and seems to have conditioned history of art for hundreds of years. His followers claim that this rule was applied already in the classical era, as even the Parthenon seems to have been built following the relations of the golden rectangle.
The golden spiral is calculated according to the divine proportion of the Fibonacci number 1.61803398... and is very similar to the rule of thirds, even if the position of the strengths changes slightly.
Some detractors believe that the golden proportion that a lot of people see in many artwork is actually a mistake, in which they try to convince themselves and try to insert a rule even where it is not present. Without going into the heart of the discussion, let us try to understand the differences between the rule of thirds and the golden sections.

The golden rectangle and the golden sections

We believe that taking photographs keeping in mind the shape that a golden spiral (in every direction) would have on our photography is absolutely harder than imagining simple lines that cuts the image, so is better to consider an alternative solution that maintains golden standards valid but is easier.
Using the golden rectangle as a proportion, we divide the image into three thirds, where the central third is smaller. The proportion of the central third is given precisely by the divine proportion of the Fibonacci number 1.61803398..., so the two side thirds are exactly 1.62 times larger than the central one. In the next example you can clearly see what we intend. Obviously the same ratio must also be used for the vertical thirds.

Break the rule of thirds

As with any rule, now let's talk about the exceptions. Rules of thirds should not always be applied as an absolute law: in macro photography of a flower it loses value, because we would keep the subject in the center of the image, to attract the attention. In some photographs the subject could be even relegated to the corners of the image, attention however to justify your choices, otherwise the image could result "wrong". One last exception is a photograph of a lake. In case in which there are reflections in the water, it is good practice to put the horizon at the center of the photograph, to give greater value to the symmetry of the water mirror.

There are also angry detractors against the rule of thirds and the golden rule. They support (perhaps rightly) that applying rules written in photography is simply a way to impose heavy and unnecessary limitations in the composition. The provocative question they ask is: how many beautiful images work just because they don't follow the rule of thirds? The answer is on "Breaking the Rule of Thirds" Flickr page, from which I took the photographs below.

What do I think? I believe that, as always, before thinking about breaking the rules it is better to perfectly learn how to respect them. Many good artists have invented something new, but very few have become famous without first having learned how to do their "work" with a little healthy apprenticeship respecting the "artistic laws".