Standard aspect ratios used in photography, really useful if you want to give your pictures a different crop, while respecting standards.

When you edit a picture, if you want to crop, would be better if you'd use one standard photography aspect ratio, but what does "aspect ratio" means? In easy words, it's simply the proportion between the width and the heigh of a picture. Working with any photo editing software (in our case Gimp) is really simple to to fall into the temptation to randomly cut a photo as we like, without considering that there are very precise rules of format that should be respected.
The standards belong to the photography with films and have been maintained (fortunately) unchanged over the years, even in a world of digital imaging, social networks and "stretched" monitors, in new years there have been a couple of new appearances. 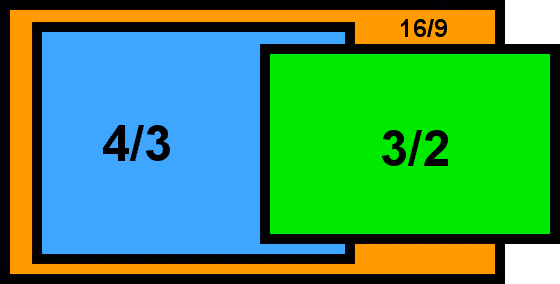 Let's start with the standard format par excellence, the 35mm of the analogic reflex cameras. With a ratio of 3/2. the rectangle is stable, well-proportioned, absolutely perfect for horizontal photos for almost any subject. Most cameras of any manifacturer use this standard. It's height becomes a little too much in case of vertical photos, distracting the viewer. The print of the classic photos is 15x10cm, that is 3/2, and has been absolutely the most used and more recognized aspect ratio for years.

Following there is the 4/3 format, the standard par excellence of old CRT (cathode-ray tube) televisions or of the older computer screens. It is sometimes used in compact cameras, but it is a standard that struggles to establish itself in photography, because of its squarish and slightly disproportionate shape, and also becasue the panoramic screens are becoming the standard thanks to the smartphones and televisions. It is very suitable for vertical photographs, but the subject will be discussed later.

The 16/9 format has initially appeared in home cinema, now has become the standard for screens and televisions. Is perfect for panoramic photography, because it makes the image as much as close as possible to the human vision. Absolutely not recommended for vertical images, many times it is a mandatory choice if you need to project your photos on a television of the last generation (Full HD, 4K or 8k) without leaving black bands on both sides of the image.

The 21/9 format is called Ultra Wide and is used in cinemas and some computer screens. Although it is a format that has never really taken off very much in homes, is finding a new niche in video games, thanks to the very immersive effect that creates with the ultra panoramic monitors.

An unconventional format, but sometimes used in photography, is the square format. With an aspect ratio of 1/1 works only for few photos, because it creates the idea of a "cut", but is very balanced, so is suggested if your photographt depicts a really symmetric subject, that shoud be positioned in the middle of the shot. Some professional photographers shoot in this format with digital backs, but sometimes the film is subsequently cut into other formats because of the difficult composition with this aspect ratio. Square aspet ratio is also used for the profile pictures in most of the social networks.

The 3/4 is the most suitable format in vertical images. This format gives a great sense of balance, more than the 2/3. I personally consider 3/4 the only choice when I shoot a vertical picture, so everytime i take a vertical photography, I try to remember to keep a certain margin at the top or at the bottom, so I can crop the excess part of the photography without losing parts of the subject. Cameras shoots in 3/2, so, when you rotate it for a vertical photo, the result is 2/3, that is higher than 3/4.

The 5/4 is a printing aspect ratio that now is almost unused. Like its cousins 7/5, 5/3 and panoramic 7/3, it has been used because the sizes of old films were 4x5 inches, 5x7 inches and 8x10 inches. That kind of films are not used anymore, but some printers keeps the old aspect ratios as a printing option.

Now that you know the different standard aspect ratios, it would be advisable to use always one of this standards while cropping your photos, and never crop a picture randomly.

Now to the most practical part of this guide: if you want to use one of your photos to create a computer background, we really recommend to discover the native resolution of your screen and use that one; This is different for televisions, where there are more precise standards. To upload photographs to a TV you'll have to use one of the four main formats:
- Hd Ready 1360x768 for small televisions.
- Full HD 1920x1080 for the most of the screens around 32"
- Ultra HD 4K 4096×2048 for most of the televisions around 40"
- Ultra HDTV 8K 7680×4320 For huge and expensive new televisons.

Below you will find a list of some standard resolutions in the world of displays, just to give you an idea of the fragmentation:

Publication on the internet

With the advent of the social networks, it is important to make a small parenthesis, because the standard resolutions and aspect ratios are changing. For example let's take Instagram: photographers are "forced" to cut the images and redefine them in 5/4 (an out-of-standard format),
Our advice is to work always in the standard format and then change the crop ofthe photos to meet the differet layout requirements. The ultimate goal of a photograph should always be printing, so I think is better to don't be distracted by the fashions of the moment. Let's see how to export a photo for the main social networks:

Export to Facebook
Facebook tends to redefine the images on the long side, leaving the vertical resolution free. In this way we can publish the images with the aspect ratio that we prefer. We have to scale the images to 2048px on the long side for upload in high quality and try to minimize the compression done by the social network.

Export to Instagram
Unfortunately Instagram is quite ruthless with the crop of photographs, so if you are not careful you risk to find out that you miss a slice of the image after the upload. If you want to keep a standard aspect ratio, the only way to overcome this problem is to add bands above and below the photograph or voluntarily cut in the 5/4 size (non-standard). So you have to decide if you want to crop the shot or if you want to add some bands. The recommended export resolutions to avoid further compression are:
- 1080x1080px for square photo 1:1
- 1080×1350px for horizontal photo 5:4
- 1340×1080px for vertical photo 4:5

If you need to print your pictures, respecting the standard aspect ratios is even more important. If you want to avoid unwanted crops or unprinted bands, you have to choose wisely the crop of your photos. In the choice of photographic papers, it is possible to find all the standard sizes plus some old formats that are no longer in use, such as 4/5 or 5/7.
Very important in printing is also the resolution of the shots that will be used, because a larger print size needs higher resolutions in megapixels in order to have the maximum sharpness. Below we will list the standard formats and the minimum recommended resolution for printing. Obviously the minimum resolution is not the recommended one, which should be at least double, although much depends on the resolution of the machine that will be used to print the photos.

If you liked our work, you could consider to support us: by clicking here you can see how. If you liked this tutorial here you can find all the other tutorials we wrote about photography, or you can go there to take a look to our tutorials for post production with Gimp.